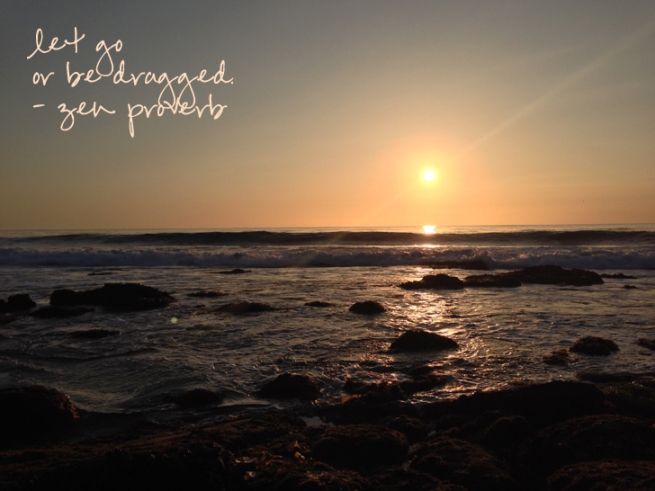 Have you ever picked something up that seemed light at first, but the longer you held it the heavier it felt? A newborn baby? A slim line laptop? A gallon of milk?

No matter how light these things seemed, after a while your arms began to ache. Your body showed you discomfort, so that you would make a change. You had to either shift the weight or put it down.

Physical discomfort frequently requires us to make a change in order to get relief. But what about mental discomfort? Though usually more subtle, the things we carry in our minds can weigh us down.

Often our heaviest loads come from things that have no physical shape: assumptions, mistaken beliefs, and the stories we have been told about who we are supposed to be. The stories we learned well and continue to tell ourselves.

Lately I’ve been thinking about holding on and letting go. And I offer these three stories so that you, too, might reconsider what to keep and what to let go.

Story One: A Parable

A senior monk and a junior monk were traveling together, when they came to a river with a strong current. As they prepared to cross the river, they saw a beautiful young woman who also wanted to cross. The woman asked if they might help her.

The two monks exchanged glances. They had taken vows to never touch a woman. But then the older monk picked the woman up, carried her across the river, and placed her gently on the other bank.

The younger monk joined the older monk on the other side of the river and they continued their journey in silence. The younger monk was very troubled by what had just happened.

An hour passed without a word between them. Then two hours. Then three.

Finally the young monk could not contain himself any longer and blurted out, “As monks, we are not permitted to touch a woman! How could you carry that woman across the river?”

The older monk looked at him and replied, “Brother, I put the woman down hours ago. Why are you still carrying her?”

I love the lesson in this simple parable. How often do we carry around past hurts, mistakes, and events that we should “put down”? We can choose to ruminate over and regret the past, but it will ultimately weigh us down. Or, like the elder monk, we can put the past behind and move forward.

The Things They Carried by Tim O’Brien, tells the heartbreaking story of young soldiers trekking through the jungles of Viet Nam. Throughout the story O’Brien chronicles for the reader the necessary implements of war that the soldiers “humped” up the hills and through the swamps: weapons and provisions, radios, helmets, compress bandages, mosquito repellant, canteens of water, plastic ponchos that became raincoats or groundsheets or tents, or a way to carry a wounded soldier to the helicopter that would take him away.

In addition to what was carried, O’Brien tells us the weight of each item. We can almost feel the impossible weight as the load is piled on.

And the young men carried other things, too, items that connected them to their past, their hopes, their identities: chatty letters from a girl back home and the possibility of love; photographs; comic books; good luck charms – a white pebble, a rabbit’s foot, the thumb of a Viet Cong corps. Kiowa carried “his grandmother’s distrust of the white man, his grandfather’s hunting hatchet”.

They carried each other, the wounded and the weak. They carried infections, chess sets, lice and ringworm and mold, tanning lotion, basketballs. You get the idea about the weight of things!

You can see how they carried physical items with real world weight as well as the non-physical, the things that weighed on their minds.

O’Brien’s story is a beautiful example of Finding Truth in Fiction. Among the lists of items and weights he tells us: “They carried all they could bear, and then some, including a silent awe for the terrible power of the things they carried.”

This last line is especially powerful. What weighs on your mind? What kind of “terrible power” does it have over you? How different would your life be if you put it down and walked away?

This third story is short and personal. Like most people, I carry a lot of ideas, assumptions, and stories that I have collected throughout my life. The longer the life, the greater the collection of stories. And sometimes the heavier the load.

I carry stories about what my role is as a woman, a mother, a grandmother, an American, a teacher, a manager, the list goes on and on. Stories from my German-Irish-Christian heritage. Stories I was told – true or not – about my worth, my talents, my flaws and limitations.

Last week I was struggling with a migraine. For over five days I worked on a cocktail of prescription and non-prescription medications trying to find the right combination to relieve the pain.

In addition to drugs, I used heat, ice, darkness, quiet, hydration, naps, and saunas, all to no avail. I went to the chiropractor and had my neck cracked. By Friday (day 5) I was all out of ideas.

Nonetheless, I continued to try to work. My vision was not optimal; I squinted at my computer screen. Why? I was sick but I wouldn’t stop! I’d barely slowed down!

In the process I began to examine some of my own stories about myself. Here are a few of the mistaken beliefs that I found.

So many messages of “suck it up”, “stop whining”. At the core of these messages is worthiness. Pretty strong word. Pretty damaging mistaken belief. “I am not worthy of a break, of unplanned time off.”

When I landed on worthiness, I knew I was in trouble. I canceled meetings, turned off my computer, and closed my office door behind me. I got an ice pack and a blanket and headed for the couch.

I consciously chose not to carry the mistaken belief that delaying my work deliverables meant I was a loser. I’ve been carrying that belief far too long. And it doesn’t even belong to me; it was given to me by past generations.

Eventually the pain subsided, just as it had arrived, for no apparent reason. Sometimes the best remedy is time. I am grateful that the pain is gone. And I am grateful for the lessons it brought:

Shame researcher Brené Brown in her book The Power of Vulnerability encourages us to take ownership of our stories. Because “when you own your story you get to write the ending.”

Do you have stories that no longer serve you? Are you carrying around someone else’s stories, stories that belong to your parents, your ancestors, your culture, that never really belonged to you at all? What stories will you retell or delete or change the ending to?

2 thoughts on “Holding On And Letting Go. Three Stories.”