Story #1 – Five pesos and a lifetime of abundance

My aunt Carmela once gave me a five-peso coin that had been blessed by our parish priest. She told me to keep it always so that I “would never be without money”.

That was over 30 years ago. Five pesos was not much money even back then. It may have bought a half-kilo of tortillas. On today’s economy that particular coin won’t buy anything. It was retired from circulation years ago.

But that doesn’t mean the coin is worthless. For me it represents: intention, abundance, and gratitude. Its value is in the story and my aunt’s desire for my prosperity.

How do we measure prosperity anyway? Certainly not by the coins in our pockets. Is having money the same as having a life of abundance? How much money is enough?

Story #2 – An American, a Mexican, and an Israeli walk into a bank

The year was 1982. The Mexican economy was in trouble. The country had more international debt than it could cover.

On Friday, September 3, after the banks had closed, President Lopez Portillo announced the nationalization of the banks. Going forward the government controlled all banking regulations.

Prior to the announcement we had been allowed to designate our bank accounts as either pesos or U.S. dollars. Now all bank deposits had to be in pesos. Those of us who had accounts in dollars had to go to the bank to authorize the conversion.

In addition, the rate of exchange being given was half what it was the previous day. Half! 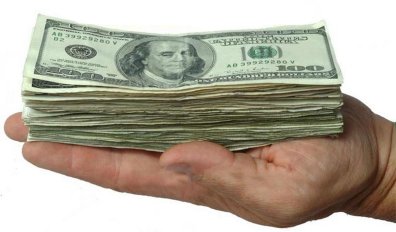 At the bank on Monday I stood in line between a woman who was Mexican and a man from Israel. As we waited for our turn we began to talk, and I soon realized that we had 3 very different interpretations of the situation.

As the American, I was shocked that there wasn’t more outrage at the government taking half of our money. I’d never experienced such a swift and extreme devaluation.

The Mexican woman was thankful that the government hadn’t simply confiscated all of the dollars. She seemed somewhat satisfied, accepting the situation with little complaint.

The man from Israel told us a story of emigrating from a country where he had a lot of money in the bank but there was a shortage of goods to purchase. “Piles of money,” he said. “Not enough food in the markets to go around.”

Three very different perspectives. What do the responses tell you about our money stories? How would you respond in such a situation?

Story #3 – Exchanging Promises. A Goat, some chickens, a pair of boots.

The physical money has very little real value. It’s just paper, metal and plastic. Coins, credit cards and bank transactions are simply an instrument  of exchange. A promise to pay.

As long as we all agree on the value of the instrument, we are happy to accept “the promise” from each other.

Consider this. Suppose you and I own adjoining farms. You raise goats and I raise chickens. You want some chickens, and we agree that ten chickens are worth one goat. You bring me a goat and I give you ten chickens in return. A simple exchange, right?

But suppose I don’t want a goat. Suppose I want a pair of boots. And the store in town won’t take my goat in exchange for boots. We have a problem.

But, if you have money, you can give it to me in exchange for the chickens you want and you can keep the goat. I can then go into the village and exchange the money for boots.

We don’t really “need” money. What we need is a way to exchange goods and services. And, money is a lot easier to carry around than a goat!

In reality we are just exchanging promises to pay. It’s the desired goods that have value; the money is just a vehicle.

We all need a variety of goods and services: today’s lunch, our home mortgage, schoolbooks, a vacation, and nice boots. What about retirement? The future? How do you anticipate and plan for future expenses? How do you plan to accumulate wealth, or have a reserve for unexpected “promises”?

“Too many people spend money they haven’t earned, to buy things they don’t want, to impress people that they don’t like.” – Will Rogers

1. Take Inventory and Be Grateful
Become aware of your reasons for spending. Take an inventory of what you have. Strive to spend your money on what you value.
It doesn’t matter what your neighbor has or wants. This is not a competition! There is no need to “keep up with the Joneses”.
Recognize your personal abundance. Adopt an attitude of gratitude. Before making an unplanned purchase, ask yourself why you are buying it. Is it aligned with your values? Or, are you buying on impulse?

2. Rainy Day Thinking. Saving for later.
Adopt a pay-yourself-first mentality. Get out of the habit of living paycheck to paycheck by committing yourself to saving. Designate a certain amount of money to be saved each paycheck and then stick to it!
Saving for a “rainy day” will reduce your money stress and prepare you for that unexpected expense. It’s nice to have a cushion. Cushions provide comfort!

3. Practice Generosity
When you are truly aware of and grateful for your own abundance, you are generous with others. Prosperity is not measured by money alone. It can take the form of time, love, comfort, and wisdom.
Sharing your wealth will enrich your life and the lives of others. Having more money is not enough. You need to enjoy it too!

Call to action: Make a list of what matters most to you. Are you spending your money in a way that will enrich your life? Is it time to examine your beliefs about money, prosperity, and abundance? Are you managing your money, or is it managing you?